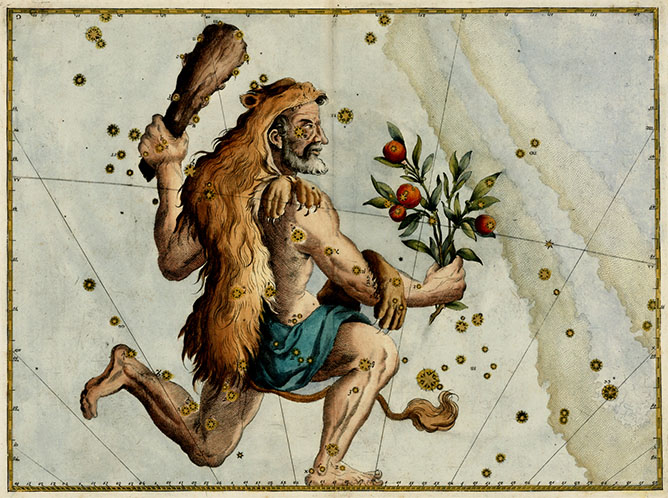 The Myth Behind the Constellation Hercules

Most famous of the Greek heroes, Hercules was the son of Zeus and the beautiful Alcmene.  He was renowned for his strength and courage, and accomplished a great many feats.  Many of these feats were done to atone for terrible things he had done.

Upset with Zeus’ affairs, Hera made it her personal mission to make Hercules’ life miserable.   In a fit of madness caused by Hera, Hercules killed his wife and children.  He sought out the Oracle at Delphi to find out how he could atone.  He was told he needed to serve King Eurystheus for 12 years, who set him to 12 labors.  The labors included:  1) killing the Nemean lion;  2) killing the Lernaean Hydra;  3) capturing the hind of Ceryneia;  4) capturing the Erymanthian boar;  5) cleaning the stables of Augeias;  6) driving away the Stymphalian birds;  7) capturing the Cretan bull;  8) stealing the man-eating horses of Diomedes;  9) stealing the Girdle of Queen Hippolyte;  10) capturing the cattle of Geryon;  11) stealing the Golden Apples of the Hesperides; and  12) capturing Cerberus.  He completed the labors with strength and wits.

A life filled with victory and sadness came to an end when he donned a ceremonial robe made by his wife, Deianeira.  She had tainted it with a terrible poison that she had been told was a love potion.  The poison burned into Hercules’ skin like acid, creating such unbearable pain that the hero begged to be killed.  He was burned alive on a funeral pyre, and his spirit ascended to Olympus, where he was blessed with eternal life and youth.

These are the stars in Hercules with a minimum magnitude of 3.0.