Fall is officially here and with that a good time to see the zodiacal light, and with the Moon absence from the morning sky for the next couple weeks it makes a particularly good time to get a glimpse. 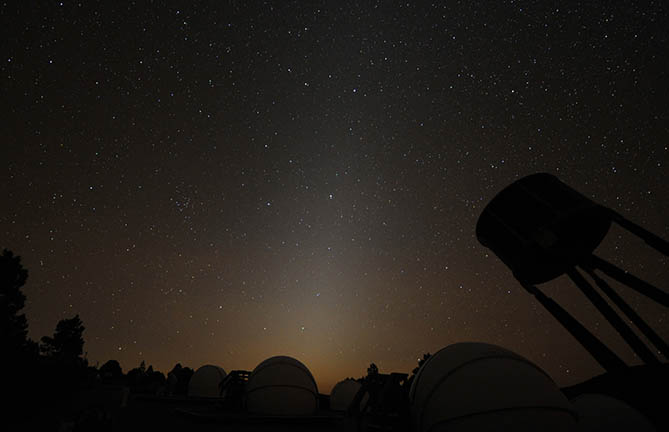 What is zodiacal light and what causes it? It is a pyramid-shaped glow that appears in the eastern sky before dawn or western sky just after sunset. This phenomenon is caused by sunlight reflecting off the dust particles that move in the same plane as the Earth and other planets as they orbit the Sun. The zodiacal light appears brighter the closer you get to the equator.

At this time of year you can see the zodiacal light an hour or two before dawn in the eastern sky. Observers in the Southern Hemisphere can see it after sunset. Dark skies will be needed to see it, so try to get far away from the city lights.

Draconid Meteor Shower 2015 October 9th will mark the peak of this years Draconid Meteor Shower, named for the constellation Draco, where the meteors appear to originate from. This shower is also known as the Giacobinids, for comet 21 P/ Giacobini-Zinner, the comet that left the dust debris responsible for this meteor shower. In the past the Draconids have been responsible for some of the most spectacular showers, but in general they tend to be one of the less impressive ones. This year a new Moon will be on October 13th, making viewing more favorable.

Full Snow Moon 2015 Winter hits its stride is in February, and with it typically comes heavy snow falls. It’s these snow falls that inspired the most common name for February’s Full Moon, The Full Snow Moon. During this time hunting would become very difficult and food scarce for some Native American tribes, giving this moon another one of its names, the Full Hunger Moon.

Full Wolf Moon 2015 The howling of hungry wolves out in the still cold air and deep snows of January are what inspired Native Americans to call this month’s full Moon the Full Wolf Moon. A few tribes called it the Old Moon or the Snow Moon, and it is also know by some as the Moon After Yule.