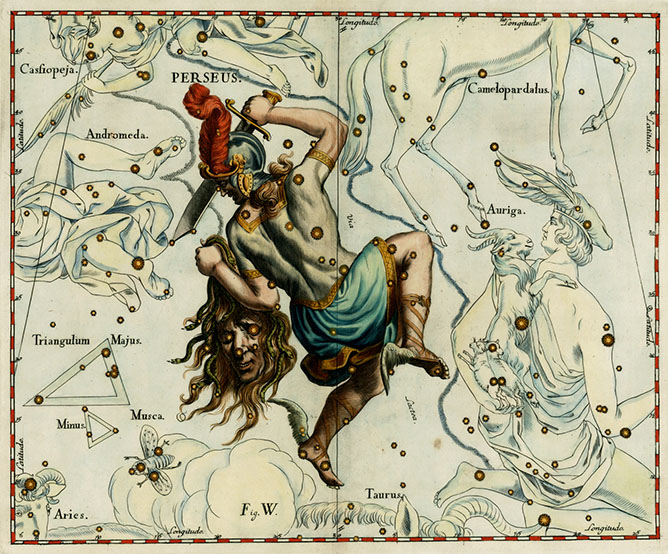 The Myth Behind the Constellation Perseus

Perseus was the son of Zeus and Danae.  As a baby, he and his mother were put in a chest and cast into the sea by Acrisius, Danae’s father.  An oracle had told Acrisiusa that a son of Danae would one day kill him.  Their chest came ashore on the island of Seriphos, where they were found by a fisherman named Dictys.  Perseus grew up being very protective of his mother, so when King Polydectyes started to take notice of the beautiful Danae, the king knew he would have to get the young man out of the way.  The king tricked Perseus into a quest to obtain the head of the Gorgon Medusa, a creature so hideous that any person to look directly upon it would turn to stone.

Aided by gifts from the gods, including a shiny shield from Athena, Perseus found the location of Medusa’s lair and decapitated her with a single stroke of his sword by using the shield as a mirror to see only her reflection.  The winged-horse Pegasus sprang from Medusa’s blood and Perseus mounted him and headed home.

On the way he came across the beautiful Andromeda, daughter of King Cepheus and Queen Cassiopeia.  She was chained to a stone on the shore of the Aethiopian coast; a sacrifice to appease the sea-monster Cetus, who had been wreaking havoc on the Aethiopian people.  One look and he was in love.  As the monster was about to claim his prize, Perseus whipped out the head of Medusa and turned Cetus into stone, saving Andromeda and the country.  Perseus and Andromeda wed.  Years later he accidently killed his grandfather, Acrisius, with an errant discus throw.  When Perseus died, he was placed amongst the stars.

These are the stars in Perseus with a minimum magnitude of 3.0.