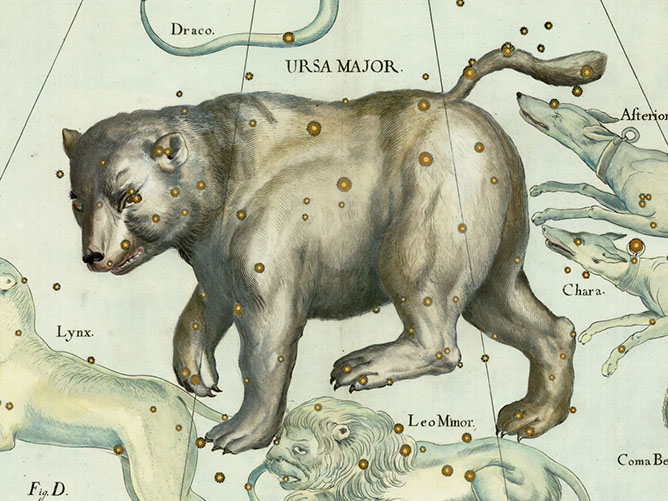 The Myth Behind the Constellation Ursa Major

Ursa Major “The Great Bear”, is often said to be Callisto, a follower of Artemis and one of Zeus’ conquests.  Callisto in Greek means “most beautiful.”

Zeus, taking the form of Artemis so he could get close to Callisto, forced himself on her.  A son, Arcas is born. To protect Callisto from the jealousy of Hera, Zeus turns her into a bear.  Their son is raised by Maia, the mother of Hermes.  Many years later Arcas has become a masterful hunter and comes upon his mother in bear form.  Callisto recognizes her son and tries to greet him but her words only come out as growls.  He is about to kill her when Zeus, taking pity, places them in the stars as Boötes and Ursa Major.  In another version her son is turned a bear and placed into the sky as the constellation Ursa Minor.

These are the stars in Ursa Major with a minimum magnitude of 3.0.