The few weeks surrounding the March Equinox are a great time to gaze into the night sky and search for incoming fireballs.

“The Earth getting bombarded by fireballs? Sounds disastrous. Is this the evil doing of some cosmic wizard or stellar sorcerer? “

No need to worry. As far as we know, no one has ever been killed by a fireball from space.

So what is a fireball? 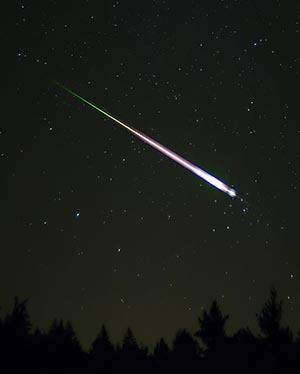 A fireball is just a particularly bright meteor. It has an apparent magnitude of at least -4, so it is about as bright, or brighter than the planet Venus. The brighter the fireball, the more rare they are.

Fireballs that are especially bright and explode in the atmosphere are commonly known as bolides. A bolide that detonates into a burst of visible fragments is a visual treat that you won’t soon forget.

More than a thousand fireballs enter our atmosphere every day.  Sounds like there’s a great chance to see one.

Unfortunately the vast majority occurs over the oceans or uninhabited areas, during daylight hours, behind clouds or behind our backs (sneaky little buggers!)

The good news? During the spring the nightly fireball rate climbs by up to 30%, giving you a better chance to observe the fireworks!

On average, an experienced observer might see one fireball with the apparent magnitude of about -4 for every 20 hours of observing.

So why are fireballs more common around the March Equinox than at other times? No one is exactly sure. But one theory, suggested by NASA, is that more debris capable of creating a fireball litters this part of the Earth’s orbit.

Another possibility is that it may have to do with the antapex radiant. The antapex radiant is the point that our solar system is moving away from as we orbit the sun. In his book Meteors and How to Observe Them, Robert Lunsford points out “Studies have shown that during the period from mid-February through mid-April, when the antapex radiant lies highest in the sky, fireball rates peak as seen from the northern hemisphere.”

No matter what the reason for the fireball increase is, now is a good time to try to spot one.