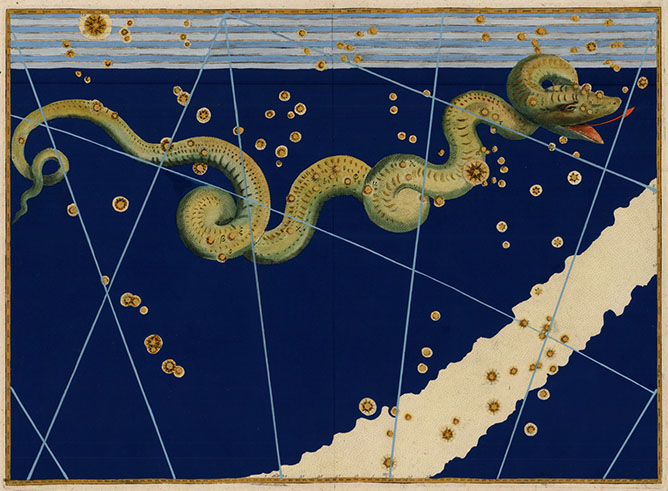 The Myth Behind the Constellation Hydra

Hydra represents the Lernaean Hydra, a reptilian monster so vile that even its breath and blood were highly poisonous.  It had nine serpent heads, eight mortal and one immortal.  Every time one was cut off two would grow in its place.  Defeating the Lernaean Hydra was the second labor assigned to Hercules by King Eurystheus.

In the marshes of Lerna, Hercules drew out the Hydra from its lair, and with his mighty club, bashed one of its heads in.  In its place, two heads sprouted, just as mean and deadly as the original.  He realized he would need to take a different approach.  He had his nephew Iolaus quickly cauterize each stump after it was bashed in.  This prevented the heads from growing back.  Hercules did this with each of the mortal heads.  He struck off the immortal head and buried it deep in the ground and placed a huge rock on top of it.

With his second labor complete, he dipped the tips of his arrows into the blood of the Hydra, covering them with deadly poison.

In a second myth involving Hydra,  this constellation represents the snake that Corvus used in a lie to Apollo.

These are the stars in Hydra with a minimum magnitude of 3.0.